By Jody Huelsman – All items are located at the Sandy Bay on the Southwest corner of Gilmore. 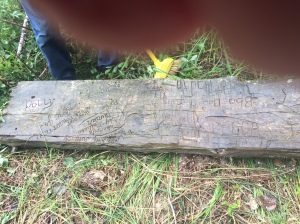 —Missing Triangle Dock Section (Daka Dock). 4’x4’x5.6′ and made of molded plastic with Aluminum runners on the bottom side. (John White on Middle basin of Gilmore – Western shore) – see photo

by Jody Huelsman – Almost new log Adirondack chair—now on sandy beach at southwest corner of lower basin of Gilmore.  Also a black float for a pier.  On the beach just north of the sandy beach (west side of lake) is a piece of pier propped up against a tree, and a heavy metal canoe, (not new) tipped on its side near the back end of the beach.  Cream colored plastic lawn chairs on beach just northwest of the sandy beach at southwest corner of the lake.

by Patrick Luetmer – Found three dock sections on east side of the lake before the North bay. 4 feet wide 47 1/4 Inches Long made of green treat bought at Mary’s River lumber

by Jen Schneider – dock pieces, decking and including poles on western shore of lower basin of Gilmore (photo)

By Kevin Smith  (on left, a dock bench;  on right, a black float for a dock)

POSTINGS  (These are also posted on the Gilmore Lake facebook page, which is a closed group. Contact Fran McCloskey or Jan Filer to be added to the Facebook group)